All State Squad performances are held at the Boys State Basketball**

Cheerleading Handbooks are sent to every school**

Four academic scholarships of $500 each are given*

IHSAA begins to print and mail the ICCA newsletter*

ICCA works with the Special Olympics for the first time*

State Championships in November grows from 67 to 97 teams

Conference has record of 115 coaches registered

The ICCA starts the Representative Council

Small Team Division is eliminated from the State Championships

Stunt Group Divisions are broken down into 1A, 2A, 3A, 4A, and Coed classes at the State Championships

4A Large School Division is dropped in the State Championships to align all schools to size (1A, 2A, 3A, 4A)

Time Out Divisions changed to school class size -1A, 2A, 3A, 4A instead of Small School and Large School

ICCA begins the Distinguished Service Award for an active coach.

The ICCA moves to 5 area districts instead of 6 districts.  This aligns with the IHSAA’s districts.

Many changes happened because of Covid-19. 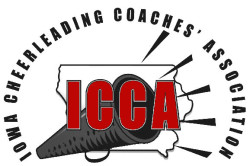